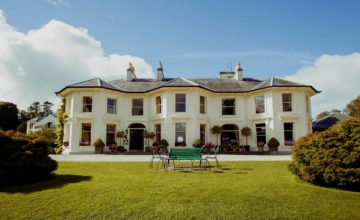 More a professional operation, less an intimate Irish country house experience, Mark and Mary Wheeler’s hotel on the shore of Lough Swilly, in ‘wild and wonderful’ Donegal, has something for everyone.
Read our review 10% discount voucher Upgrade voucher
2

A half-mile avenue meanders through parkland to Roderick and Helena Perceval’s classical mansion overlooking the ivy-clad ruins of a Knights Templar castle on a lake.
Read our review Upgrade voucher
3 ‘Utter comfort – a fire lit after breakfast in the drawing room, drinks from the bar when needed.’ An endorsement from a regular visitor, following another stay at this family-run hotel.
Read our review 10% discount voucher
7

It’s a glorious drive through rolling countryside to Anne and Warwick O’Hara’s manor house, where guests are welcomed with tea and ‘a delicious variety’ of home-made cakes.
Read our review
8 In a small harbour town between the foothills of the Twelve Bens and the Owenglin river where it meets the Atlantic, Julia and Paddy Foyle run their B&B with ‘generosity of spirit’.
Read our review 10% discount voucher
9

The Mustard Seed at Echo Lodge

‘We were charmed by the hotel and its attentive staff.’ Guide regulars declared John Edward Joyce’s country house hotel ‘in a class of its own’ in 2019, with praise for the man himself: ‘Mr Joyce has a gift for hospitality.’
Read our review Upgrade voucher
10 A ‘splendidly labyrinthine’ Victorian pile overlooking a lake, this castle in name only is Ireland’s brilliant riposte to the corporate blandness of many modern hotels.
Read our review
11

‘In a stunning location’ overlooking Lahinch Bay, Antoin O’Looney’s small hotel is upgraded from the Shortlist this year, on the urging of a reader who delighted in all that she found.
Read our review
12 In ‘beautifully maintained’ grounds, from orchards to a Japanese garden, Beryl and James Kearney’s early 17th-century mansion is ‘memorable for all the right reasons’, reports a Guide stalwart in 2019.
Read our review 10% discount voucher 25% voucher Upgrade voucher
13

Bobbie Smith is the welcoming heart and soul of this B&B in a former 19th-century rectory, which she runs with her daughter. It’s a ‘hidden gem’, say readers, with ‘tasteful and fine decor and furniture’, ‘exemplary comfort and service’.
Read our review 25% voucher
14 Phil and Rhoda Nolan’s friendly B&B is well located for exploring the medieval town with its castle and cathedral, just across the River Nore.
Read our review
18

Much loved by a loyal following, this ‘very special’, creeper-clad pink Georgian country house is a beacon of hospitality in wild Connemara.
Read our review
19 A library in the stables, dedicated to the history of the evolution of civilisation, is a unique selling point, but there is much more to enjoy at Paddy and Hannah Flynn’s Georgian mansion in parkland beneath the Slieve Bloom mountains.
Read our review 25% voucher
20

Reached by a mile-long drive, Fred and Joanna Madden’s grand Italianate country house stands in ‘an estate of great beauty’, with working farm, golf, lakes for fishing and wild swimming.
Read our review
21 In a ‘dramatically beautiful’ setting overlooking Bunatrahir Bay on the Wild Atlantic Way, Frances Kelly-McSweeney’s hotel was built for its stellar sea views.
Read our review
22 In a pretty town between the wild and wonderful Ring of Beara and the spectacular Ring of Kerry, this ‘attractively priced’ hotel exudes ‘a genuine sense of hospitality’, thanks to the ‘warm, helpful, friendly’ staff – and to hosts Una and Dermot Brennan.
Read our review Upgrade voucher
23 On the shores of Lough Eske, a traditional hotel run with old-fashioned care by the Gysling family.
Read our review
25 In ‘a spectacular position’, cradled by a mountain range, this Victorian fishing lodge is a remote and peaceful place.
Read our review 10% discount voucher 25% voucher Upgrade voucher
{"style":"detailed","total":25,"notpage":"false","return_count":false,"filter_country":"ireland","search_tags":"golf"}

The Emerald Isle is home to some of the best golf courses in the world, and as a result it has also attracted some of the greatest golfers in the world to play their.  Tiger Woods, Phil Mickelson, Tom Watson, nick Also and Colin Montgomerie are just some of the names who have played professionally in Ireland and waxed lyrical about its quality.  Meanwhile, famous faces such as Bill Clinton, Dan Quayle, Michael Jordan have also enjoyed playing in the area.

With spectacular scenery and some of the purest golfing experiences in the world, the landscape is adorned by top resorts, hotels and courses.  Ireland has played host to many of the top tournaments in the world, including the Open Championship, the Ryder Cup and the Walker Cup, which all attest to its quality courses and high standards.

However, Ireland’s welcoming hospitality also extends to the greens and for holiday makers in the region, this too adds to its appeal for visiting golfers.  The country is home to two-thirds of the world’s total links courses which gives you an idea of scope, and perhaps too the type of game you can expect.  For families visiting with eager beginners there’s the opportunity to learn while on holiday here with plenty of clubs offering lessons and driving ranges for those looking to practice their swing.

Of course, a day on the golf course wouldn’t be complete without a hearty meal to return to at the end of the day, and while the club houses do an excellent job, it is the hotels and B&Bs that shine when it comes to hearty, local specialities at the end of a busy day.

Join more than 10,000 other members.
Read more about it here